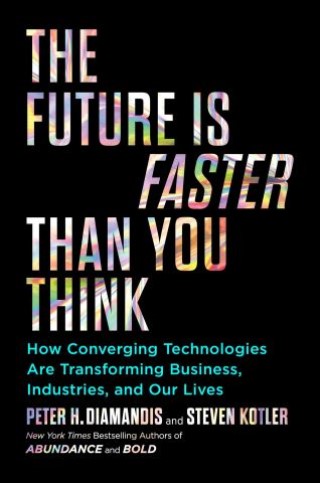 The Future Is Faster Than You Think

How Converging Technologies Are Transforming Business, Industries, and Our Lives

From the New York Times bestselling authors of Abundance and Bold comes a practical playbook for technological convergence in our modern era.

In their book Abundance, bestselling authors and futurists Peter Diamandis and Steven Kotler tackled grand global challenges, such as poverty, hunger, and energy. Then, in Bold, they chronicled the use of exponential technologies that allowed the emergence of powerful new entrepreneurs. Now the bestselling authors are back with The Future Is Faster Than You Think, a blueprint for how our world will change in response to the next ten years of rapid technological disruption.

Technology is accelerating far more quickly than anyone could have imagined. During the next decade, we will experience more upheaval and create more wealth than we have in the past hundred years. In this gripping and insightful roadmap to our near future, Diamandis and Kotler investigate how wave after wave of exponentially accelerating technologies will impact both our daily lives and society as a whole. What happens as AI, robotics, virtual reality, digital biology, and sensors crash into 3D printing, blockchain, and global gigabit networks? How will these convergences transform today’s legacy industries? What will happen to the way we raise our kids, govern our nations, and care for our planet?

Diamandis, a space-entrepreneur-turned-innovation-pioneer, and Kotler, bestselling author and peak performance expert, probe the science of technological convergence and how it will reinvent every part of our lives—transportation, retail, advertising, education, health, entertainment, food, and finance—taking humanity into uncharted territories and reimagining the world as we know it.

As indispensable as it is gripping, The Future Is Faster Than You Think provides a prescient look at our impending future.

Peter H. Diamandis: Peter H. Diamandis is a New York Times bestselling author and the founder of more than twenty high-tech companies. He is the founder and executive chairman of the XPRIZE and executive founder of Singularity University, and the cofounder of Human Longevity, Inc., Celularity and Bold Capital Partners. Diamandis attended MIT, where he received his degrees in molecular genetics and aerospace engineering, and Harvard Medical School, where he received his MD. In 2014 he was named one of “The World’s 50 Greatest Leaders” by Fortune magazine.Steven Kotler is a New York Times bestselling author, award-winning journalist, and the founder and executive director of the Flow Research Collective. His books include Stealing Fire, Bold, The Rise of Superman, Abundance, A Small Furry Prayer, Tomorrowland, West of Jesus, and Last Tango in Cyberspace. His work has been nominated for two Pulitzer Prizes, has been translated into more than forty languages, and has appeared in over a hundred publications, including The New York Times Magazine, The Atlantic, Wired, Forbes, and Time.