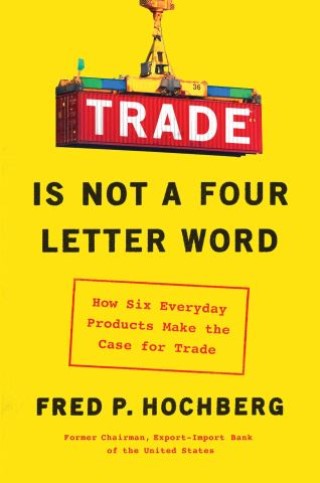 Trade Is Not a Four-Letter Word

How Six Everyday Products Make the Case for Trade

Trade myths, busted and debunked, with the help of six surprising everyday goods—the taco salad, the Honda Odyssey, the banana, the iPhone, the college degree, and the blockbuster HBO series Game of Thrones

Trade allows us to sell what we produce at home and purchase what we don’t. It lowers prices and gives us greater variety and innovation. Yet understanding our place in the global trade network is rarely so simple, and today’s workers are wary of being taken advantage of. Trade has become an easy excuse for struggling economies, a scapegoat for our failures to adapt to a changing world, and—for many Americans on both the right and the left—nothing short of a four-letter word.

But as Fred P. Hochberg reminds us, trade is easier to understand than we commonly think. In Trade Is Not a Four-Letter Word, you’ll learn how NAFTA became a populist punching bag on both sides of the aisle. You’ll learn how Americans can avoid the grim specter of the $10 banana. And you’ll finally discover the truth about whether or not, as President Trump once famously tweeted, “trade wars are good and easy to win.” (Spoiler alert—they aren’t.)

Hochberg unravels the mysteries of trade by pulling back the curtain on six everyday products, each with a surprising story to tell: the taco salad, the Honda Odyssey, the banana, the iPhone, the college degree, and the smash hit HBO series Game of Thrones. Behind these six examples are stories that help explain not only how trade has shaped our lives so far but also how we can use trade to build a better future for our own families, for America, and for the world. There is no going back.

Trade Is Not a Four-Letter Word is the antidote to today’s acronym-laden trade jargon pitched to voters with simple promises that rarely play out so one-dimensionally. It’s time to read between the lines. Packed with colorful examples and highly digestible explanations, Trade Is Not a Four-Letter Word entertains as it dispels popular misconceptions and arms readers with a thorough grasp of the basics of trade.

Fred P. Hochberg: Fred P. Hochberg served as the chairman and president of the Export-Import Bank of the United States under President Obama from 2009 to 2017, becoming the longest-serving chairman in the agency’s history. Hochberg also served for five years as dean at the New School in New York City and has been a fellow at the Institutes of Politics at both the Harvard Kennedy School and the University of Chicago. Previously he served as acting administrator of the Small Business Administration under President Clinton. Before entering public service, Hochberg spent almost two decades leading his family’s direct-marketing business, Lillian Vernon, where he oversaw a forty-fold increase in revenue.